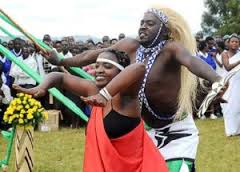 Are you from a Rwanda gorilla safari tour ? or any other Rwanda safari tour activity and you would wish to close your day with joy? Rwanda gives you a chance to enjoy live performances from its different tribes. Being a small country, Rwanda has 2 major major tribes; Hutu and the Tutsi however, they also have the Batwa. All these 3 tribes speak the same local language “Kinyarwanda” and share the same cultural heritage. Batwa people might have a small distinction from the rest Rwandese because they are pygmies and originally forest inhabitants.

The people of Rwanda are blessed with artistic knowledge and skills of making handcrafts like pots, papyrus mats and baskets, jewellery, wood carvings and among others. Rwanda today has a number of art and craft villages in both urban and village areas where any visitor on a Rwanda tour can easily buy souvenirs or any other art pieces. The craft villages in Uganda include Ivuka art centre, Nziza, Caplaki craft village among others.

Music and drama local performances are common during social gatherings, marriage ceremonies and also for tourists on Rwanda safari tours. The local people of Rwanda pass on educative information in their music performances and have two main traditional dances that are; the Intore dance for hunters or fighters and the Inkinimba dance performed by farmers to celebrate their harvest.

On a Rwanda gorilla trekking safari in volcanoes national park, traditional music performances are made to entertain the tourist as they take coffee in the morning waiting to go for gorilla trekking I this park. Bananas, sweet potatoes, cassava, mashed cassava leaves and posho are the staple foods for local Rwandese people. Beef, goats’ meat and pork are widely eaten as a stew or roasted especially in bars and other relaxing places in Rwanda. The people of Rwanda are cattle keepers and produce milk as well which is fermented to form “Ikivuguto” a drink enjoyed by many local people.

Poems are told in relation to the Rwanda pre-colonial times, genocide and the current state of the country. Today, there are a number of Rwandese writers including the prominent Benjamin Sehene. While on your Rwanda tours, you can pass by the various libraries in the country and read about Rwanda’s history.

Female cultural dresses are called “Omushanana” and it was traditionally made from bark cloth and animal skin. However with various developments in the country, the “Omushanana” today is made using various synthetic fibres like cotton, silk and among others. “Omushanana” consists of a long skirt with a ribbon wrapped over one shoulder and worn over a blouse. Traditional male clothes consist of a wrapper skirt and beads. Men wrap the skirts around their waist and beads around their necks.

All the above cultural occasions and norms can be enjoyed by any tourist on Rwanda safaris & tour. If interested, the best thing to do is to liaise with your Rwanda tour operators like Prime Safaris and Tours Ltd to specifically organize a Rwanda culture safari in the country. If not that, you can go for Gorilla trekking in Rwanda and then visit the major outstanding Traditional and cultural tourist centres.

Visit Other Destinations & Enjoy Other Activities in Rwanda

Rwanda is a top Africa Safari destination because of the amazing safari attractions and activities in the country. Rwanda safaris though being popular are much rewarding when a traveller knows where to visit when they safari Rwanda. If you are a first-time traveller and not sure of where to go, no worries, here are the top Rwanda safari destinations you shouldn’t miss out on visiting;

Known as the intellectual capital of Rwanda, Butare is home to several centres of information. The Museum houses traditional artefacts that are well-lit by an assortment of turn-of-the-century uniform photographs. These photographs provide insight, not only into pre-colonial lifestyles but also into the succeeding development of Rwanda as a modern African nation. This is one good way to understand the country during your Rwanda tour and in some way make you more comfortable connecting with the residents.

Popular as one of the cleanest city in Africa, Kigali city is a great place to visit when you tour Rwanda. The city is lively, with lots of bars, restaurants, hotels and welcoming people. Top places to visit in the city include the Genocide Memorial Centre, Hillywood (Rwanda’s top film industry destination), the diverse neighbourhood of Nyamirambo, local markets, and many other landmark places that offer an authentic slice of local life. Even with kids, you can still enjoy a city tour and get kid-friendly activities they can get involved in during their safari in Rwanda for instance horse riding.

Rwanda gorilla safaris are the top tourist activity in the country and taking the time to visit Volcanoes National Park is a great option. Gorilla trekking is done every single day as a total of 8 tourists visit a single gorilla family of the 10 gorilla families in the park. The activity starts at 8:00 am local time with a 30 minutes briefing from the park rangers who tell you of the gorilla trekking do’s and don’ts. A single hour is counted as soon as you get close to the gorillas. Remember to use your Rwanda gorilla trekking tour hour properly by using your camera right and observing the amazing gorilla interaction. There’s nothing like the same gorilla trekking experience, every day can be a different story to different tourists. The same playful and amazing tourists today can be the moody ones the next day, just go trekking expecting anything.

Sandwiched in the middle of tea Plantations, Nyungwe Forest National Park is the biggest and probably the most preserved montane rain forest in central Africa. Chimpanzee trekking on a wildlife safari in Rwanda is a common activity here as you get up close to man’s closest relatives. There will also be a maximum of over 8 people in your chimpanzee trekking group that sets out to track the chimpanzees. On your trek starting at 8:00 am remember to carry a day pack where you have a couple of litres of water, have long trousers, the long-sleeved shirt, rain jacket, hiking boots and a hat. The trek lasts about 2-4hours.

Golden Monkeys are found in Volcanoes National Park Rwanda where Mountain Gorillas are also found; Mountain Gorillas and Golden Monkeys, therefore, co-exist here. There are two habituated (made used to the presence of people) groups of Golden Monkeys in Volcanoes National Park of which tourists trek on their safaris. Each of the group comprises around 80 – 100 members which are a great sight to witness when you get close to the monkeys. Golden monkeys are a beautiful subspecies of monkeys from their golden coat, long tail to the playful and intrusive character. They spend most of their time leaping from bamboo branches or skipping on the forest floor in a manner that offers lasting memories to those who come to trek them during their Rwanda tours.

Akagera National Park is the spectacular big five (Buffaloes, Rhinos, Elephants, Lions and Leopards) Rwanda wildlife safari destination named after the Akagera River which flows along its eastern boundary. This is a great park to see the sought after African wildlife species. It is a kid-friendly Rwanda safari destination where you can visit with your family.

A visit to Dian Fossey Centre on a Rwanda gorilla tour is a popular activity because of its relatedness to gorilla trekking safaris Rwanda. Dian Fossey Centre was set up in remembrance of Dian Fossey, a primatologist who lost her life in the gorilla conservation efforts. This visit is more than just a hike but an exceptional experience physically, emotionally and intellectually. It is so inspiring to learn about someone who was so dedicated and lost her life building a legacy that has seen Mountain Gorillas as the only great apes facing a population growth.

Rwanda is a great destination and worth visiting. For great memories on a safari to Rwanda, this 13 Days Uganda Rwanda Safari is a great way to explore the beautiful land of a thousand hills. A tour to Rwanda can also be tailored with a Safari Uganda or gorilla safari Uganda to the several national parks in the country. Never the less, a Congo safari, Kenya tour or safari in Tanzania is a great way to discover East Africa.

Interested in other Africa safaris activities, below is a guide for you;